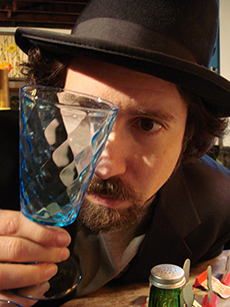 Mark Ettinger: Comprehensivist, composer, conductor, teacher and multi-instrumentalist, Mark’s played piano with Bo Diddley, sung with The Bobs, conducted the Cincinnati Orchestra at Carnegie Hall, taught at the Mannes College of Music and sung under the pines at the Crow’s Nest.

He has released three singer/songwriter albums: In This World, Songbirds of Tralfamador, and Humming Towards the Sublime, and is at work on a fourth.  He has been brewing his own brand of Neo-humanist death-defying folk-blues for years now, learning his trade as a youth in the bars and clubs of New York’s downtown scene. He has played with such characters as Big Thief’s Adrianne Lenker and Buck Meek, the Brother Brothers, Jefferson Hamer, Chris Whitley, Bo Diddley, and Allen Ginsberg, and with NYC bands Joey Miserable and the Worms, The Five Chinese Brothers, Barbeque Bob and the Spareribs, Mumbo Gumbo, and The Surreal McCoys and others. In the northwest, he has performed with Leftover Salmon, Faith Petric, Jim Page, Baby Gramps, Artis the Spoonman, and The Fighting Instruments of Karma Marching Chamber Band/Orchestra.

He plays cello and sings in Sophie Salonika, a Balkan-Sephardic band; he sings with and composes for Moving Star, a cross-genre acapella ensemble in residence at Carnegie Hall. He plays acoustic bass in the Big Bottom Marching Band, an all-acoustic bass marching band at the Oregon Country Fair, where he also co-directs the stage band for the Royal Famille DuCaniveaux.

He toured the world juggling and making silly with the Flying Karamazov Brothers for 15+ years, and as their Music Director wrote music for half a dozen shows. He is the Music Director of The Naked Truth, house band for Seattle’s Moisture Festival. His chamber opera The Triangle, based on texts by W.B.Yeats, was produced in 2005, and his score to Coming, Aphrodite (2009, La Mama) was nominated for an IT award.

He continues to search inside and out for songs of enlightenment and hopes to get a little further down the path before the lights go out. He thanks his teachers for so much. He loves his family toasters mice elmleaves loons cathedrals words roses friends walking sunrise the dhamma and his family.